Skip to main content
Home Battle of the Bulge - 75 Years

Battle of the Bulge - 75 Years

Message from the Kingdom of Belgium on the occasion of the 75th anniversary of the Battle of the Bulge.

On the celebration this year of the 75th anniversary of the Battle of the Bulge, we commemorate the immense sacrifice of American soldiers, and the sacrifice of their loved ones.  The millions of people who live and prosper today in a free and democratic Europe owe a lot to them.

I am humbled and feel great recognition for the courage and bravery that US soldiers demonstrated 75 years ago in the battlefields in the Ardennes. With a front that spanned areas of Belgium and Luxembourg, this WWII battle’s most intense fighting took place in the dense forests of southeast Belgium. There, American soldiers fought tirelessly alongside Belgian and Allied soldiers against Nazism, giving their lives to solidify the greatest values of freedom and democracy.

These have been the guarantor of peace and stability for over seven decades.  They are shared by the United States and Belgium, and many other countries around the world.

Remembrance is the first deterrent to recurrence.

In joining forces to promote and defend this common heritage, we continue to keep the realities of war in sight, both in terms of the incredible challenges and human costs that it entails.

The people of Belgium, living in my country and in the United States, honor with deep gratitude the memory of those brave American soldiers.  In December of this year, I will be pleased to attend the commemorations of this 75th anniversary in the Belgian Ardennes.  I look forward to remembering this milestone of World War II together with travelling  veterans, their families, American officials and other invited dignitaries. 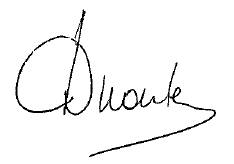 Ambassador of Belgium to the United States