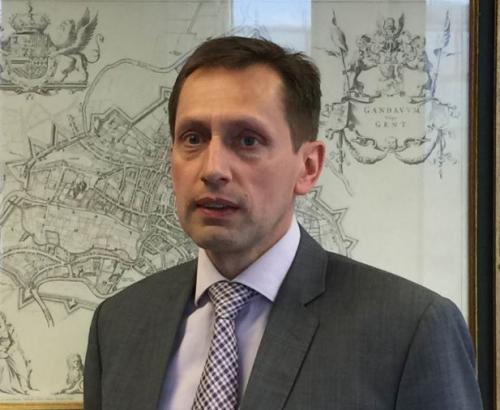 William De Baets, previously counselor at the embassy of Belgium to the United States of America, has been appointed Consul General of Belgium in Atlanta. His new jurisdiction covers Alabama, Arkansas, North-Carolina, South-Carolina, Florida, Georgia, Kentucky (Except the counties Campbell and Kenton), Louisiana, Mississippi and Tennessee.

Mr. De Baets brings to this posting 16 years of diplomatic experience acquired in Ivory Coast, Venezuela, Ethiopia, Brussels, where he headed the Foreign Affairs Crisis Center and B-FAST, and Washington, DC. In Washington he focused on political-military affairs under the leadership of Ambassador Verbeke. Before joining the diplomatic service, William De Baets served 9 years in the Belgian Navy, both on board and in headquarters.

“I would like to continue the work of my predecessors: being here for the Belgian community and helping strengthen the relations between Georgia and the whole of S-E USA with Belgium in a wide range of areas and activities” said Consul General De Baets when he took office in Atlanta on April 4th 2016.

The former Consul General of Belgium in Atlanta, Mrs. Genevieve Verbeek, is retiring after almost four years in Georgia and 41 years of diplomatic service.